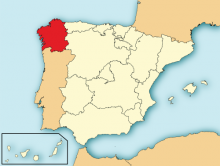 Located on middle latitudes, Galicia is in a circulation area dominated by winds from the West and it is the first point of arrival of inclement weather from the Atlantic in Spain. The autonomous community of Galicia is also influenced by masses of air with very different thermodynamic characteristics. As a result, Galicia receives masses of hot, humid air (maritime tropical weather) and masses of air which originate in higher latitudes and are generally cold, albeit with different levels of humidity. Consequently, the conclusions drawn from studies on climatic variations for northern Europe or the Mediterranean do not apply directly to this community and specific studies have to be carried out for the region.

The main evidence left behind by this phenomenon in Galicia refers to increases in temperature of 0.18°C per decade (period 1961-2006), changes to the annual precipitation spread, variations to bird migration habits, phenologic changes to plant life, increases in sea surface temperatures of 0.2°C per decade, variations to outcrops with effects on estuary renewal times, which double, changes in phytoplankton and an increase in warm water species, together with rising sea levels of between 2.0 and 2.5 cm per decade.

Xunta de Galicia has also developed actions to observe and investigate the climate (for which it maintains various observation networks that focus on Galician ecosystems) and takes part in European projects designed to identify vulnerabilities and adapt to the anticipated effect of climate change. It draws up reports to help with decision-taking processes in the area of adaptation in Galicia.